Woman in the closet

Normal mode and above

Suddenly appeared in the cabinet (Random)

White Day: A Labyrinth Named School (Remake)
/ It exists only on document in original game.

Originally a ghost that appeared in a prototype version of White Day and was removed from the final original game completely. She was supposed to appear inside the locked iron sturdy closets/cabinets that open in a disruptive way. The only thing that remained about her is the "School Ghost Stories (4)" from School Ghost Stories.

In the remake version, She was reintroduced as "Woman in the Cabinet". She appears in the lockers instead of closets, but the ghost stories name is still "Woman Locked in the Closet".

In the Mobile remake version, when you play the Hard Mode or above, she randomly appears more commonly when you open one of the lockers in the dark (using the Lighter), in Main building Section 1.

However, if you play the PS4/PC remake version, she appears in the lockers on Normal Mode or above. 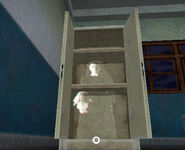 Dead cat at the Ghost Tree (At 1st floor)

Dead cat at the Ghost Tree (A close-up)

Ditto! in the cabinet. (Remake)
Community content is available under CC-BY-SA unless otherwise noted.