Actual Title: WhiteDay: a tragedy in the ghost school at 13 night, March.

It is the third stage in the White Day development cycle, and technically the second playable version in the development cycle. So far 3 known builds/versions of this Era have been identified. And only a tech demo leaked.

The existing video trailer of this stage of development; shows various characters such as Ji-hyun (in her Blood Festival attire/model appearance), So-yeong, and other characters talking although mostly motionless poses while talking. Ji-hyun's appearance  and Seong-ah's pose implies this is an early build.

A show tech demo (Dated: ‎August ‎24, ‎2000) was showcased in the british game show, ECTS 2000 in London, it was only given to a select people at the time but was leaked, which was not intended.[1][2] Since It's a tech demo, it has been stripped down that most data relating to later parts of the game are missing. Classes and many other areas are empty. The script is partially in English (the rest is unused and is in Korean) and the English translation is weak, possibly Sonnori translated it themselves for the show. Ji-hyun's data exists but she does not appear in the tech demo.

Only images exist of later builds of this prototype version/era. The differences in this version are quite drastic, though not as drastic as in White Day: Blood Festival or White Day: Ghost School as this version slowly shaped up into the final version we have today. It is generally more identical to the final game in terms of plot and overall data.[citation needed] This version evolved and became known as the final version we know today as White Day: A Labyrinth Named School. Ji-yun's model has been altered compared to earlier builds which were using the "Blood Festival" Era model. 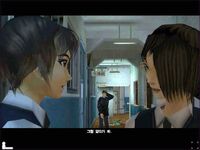 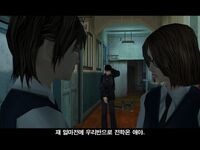 The trailer for this version begins and ends with the following words "Wired, High school, Isolation, Tragedy, Exearation" in which each first letter of these words make up the word "White". Which are the names of the chapters in the final game.[citation needed]

This differences list is based on the beta tech demo (2000) and later available material (of pre-final builds) being compared with the final game (2001).

Screenshots from the trailer.

Screenshots of the tech demo which was showcased in the ECTS british game show in August 2000.

Illuminated stick in the demo

An old 100 Won in the demo, cannot interact.

Dal-su attacking In-hyup - This scene is different and In-hyup has lots of and different grunts.
Add a photo to this gallery
Dummy Files

유령학교의 비극 오명숙 학적부실 테스트
When you load Ji-Hyun object this event will occurs correct in freezing bug zone of demo version.
Add a photo to this gallery

Below are images of removed items (hacked) in the final version. They are not present in the prototype demo data. 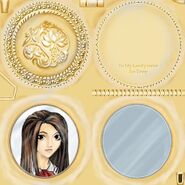 Fire Extinguisher Lever
Add a photo to this gallery

Retrieved from "https://whiteday.fandom.com/wiki/White_Day:_A_Ghost_School_Tragedy?oldid=17786"
Community content is available under CC-BY-SA unless otherwise noted.