The Girl Who Became a Spider

The Girl in the corner (Remake Exclusive) / School Ghost Stories (15)

Normal mode and above (?)

Clutching victim with hair and throwing.

Spider Ghost (Hangul: 거미귀신 ) Also known as Spider Girl or "The Girl Who Became a Spider" (거미가 된 여학생) as in the remake, is a common Ghost encountered in the New Building of Yeondu High School during the Yeondu High School Paranormal Incident.

She is described as a female adult with rather large and long black hair, long arms and limbs in general, She is able to climb walls and ceilings.

This ghost you will either encounter in several classrooms of the New Building and the Music Appreciation Room (Only in Original ver).
Her basic appearance is of a female student around 17 or 18 years old with very long black hair and spider like limbs (hands and legs) in which she hangs on to walls and ceilings like a Spider.

She will follow you if you move left or right while facing it, and if you try to move forwards towards it, it will crawl across, pick you up with its hair, chuckle and then it will fling you across the room.
It randomly appears in any of the classrooms except for all of the 1st floor (Excluding the Music Appreciation Room), the corridors outside the Main hall and the 4th floor.

The way to get rid of it in most of the classrooms is to leave the room before it grabs you (or you must turn on the lights in specific classrooms),

It only appears in specified classrooms and it is written in one document of the New Building.

You have to enter the classrooms in order of class number ( noted in the New Building's Notice ), from lower number to higher number. Then it will never appear again.

Main article: The Girl in the corner - School Ghost Stories (15) 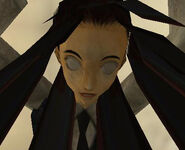 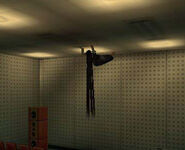 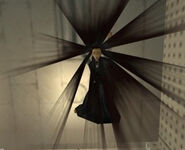 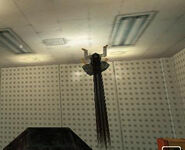 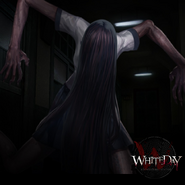 Spider's Attack (Close View of the face)
Community content is available under CC-BY-SA unless otherwise noted.