Dal-su is younger than Bong-gu and his appearance is sharp. Students are afraid of him and spread bad rumours about him.

During the paranormal events that took place in Yeondu High School he was possessed, much like Bong-gu. He patrolled the New Building, carrying a baseball bat and a flashlight with him, chasing anyone found in the school, including Lee Hui-min and the other students.

Eventually, he, along with Bong-gu, were knocked out by Choi Eun-mi after she released a high pitched scream. After this, Hui-min and the others would not be chased by either Dal-su or Bong-gu.

Like Bong-gu, he carries a flashlight, baseball bat and whistle, which he will blow upon spotting the player. He also carries P's Vending Machine Key on his belt, obtained by "ass-stabbing" him with the Sanitary Gloves. Dal-su is also much faster than Bong-gu, this is due to him not having a limp.

In the Remake ver, Sanitary Gloves were removed and as a result, P's Vending Machine Key has been removed. He blows a whistle while on patrol, signalling his presence to the player. 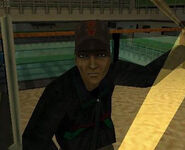 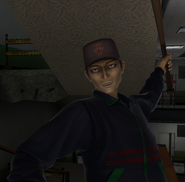 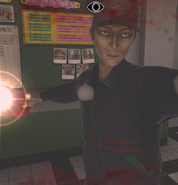 Son Dal-su cutscene (Remake)
Add a photo to this gallery

Retrieved from "https://whiteday.fandom.com/wiki/Son_Dal-su?oldid=15717"
Community content is available under CC-BY-SA unless otherwise noted.