Project Fox (프로젝트 폭스) was a role-playing online multiplayer fantasy game being developed by Ntreev Soft which would have run on the WangReal Engine (Third generation). Nothing much is known about the game since Ntreev released some screenshots and information on the official site for the project (which got shut down).[1][2]

Ntreev were recruiting developers when they announced the development of the game and "Project Fox" was to be based on urban style as the background, combined with surreal game elements to create an online action game, while "Project Fox" would have been developed by Ntreev Soft's self-developed next generation engine "W" (Actually their modification of WangReal Engine), to Create a more realistic presence of the game screen. 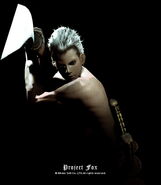 Retrieved from "https://whiteday.fandom.com/wiki/Project_Fox?oldid=14312"
Community content is available under CC-BY-SA unless otherwise noted.