In 2001 he was transferred to Yeondu High School and was involved in the paranormal events that took place on the night of 13th March when he sneaked into the school to give his favorite girl her diary and a White Day Candy.

"Lee Hee-Min
The main character and the alter ego of the player.
A boy who just transferred to Yeondu High School. Because of his taciturn and calm personality, he has no friends even among his classmates. Although he looks weak on the surface due to his neat and graceful appearance, he is bold enough to come to school in the middle of the night to confess to his favorite girl. He looks like an ordinary student that could be seen anywhere, but the inner courage he possesses is the only weapon that can weather the darkness of a school thats full of danger."
— [Translation]

The average normal looking boy you play as throughout the game, also known as the player's alter ego.

Hee-Min transferred to Yeondu High School on the March 2001, a day before the game is set. Unfortunately for Hee-Min, this is one of the reasons Seong-ah accuses you of being a threat throughout the game.

Not much more information is known about Hee-Min, this is probably because he is meant to take the role as representing you; as the player.

On the March 2001, Hee-Min, who was a recently transferred student to Yeondu High School, fell in love with So-yeong and decided to give her candy for White Day.

On the 13th of March, Hee-Min found So-yeong during a school break, sitting on a bench reading a book, he attempted to give the candy to her. But suddenly the wind blew, and a precious photo of So-yeong and Na-yeong fell at Hee-Min's feet. Hui-min picks up the photo but So-yeong snatches it off him immediately. She then walks off to accompany her friend Seol Ji-hyeon, who was waiting by a tree. Afterwards, Hee-Min picks up So-yeong's Diary, which she forgot on the bench and he decides to give it to her later along with a White Day Candy.

With no other options left, Hee-Min decided to come to the school at the night of 13th March, 10:00 PM (The School's curfew time) to leave both the candy and her diary on her desk for her to pick up in the morning.

He later encounters the two other girls, Seong-ah and Ji-hyun having a brief discussion in the first Main Building, right next to the Home Economics Classroom. But little did he know that the school holds more than he thought. At that night, It's up to him to decide his destiny and the destiny of the other girls. 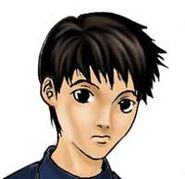 Artwork from the Blood Festival version. 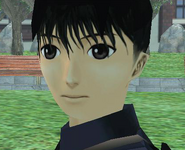 Retrieved from "https://whiteday.fandom.com/wiki/Lee_Hee-Min?oldid=18904"
Community content is available under CC-BY-SA unless otherwise noted.