Lee Bong-gu (Hangul: 이봉구) Also known as "The Janitor" or "The First Janitor" is the Janitor of Yeondu High School's Main Building.
Due to the hauntings and paranormal events, he has been possessed and will attempt to kill any students found wandering the school.

Bong-gu seems to be a normal elderly man who looks after the school during curfew at night. It's unknown how he became possessed but it's possible that the ghosts of the school are the cause.

In the Mobile version (2009) it is revealed that the geomancers who made the Amulets heard from the headmaster that the amulets have a problem, so they sneaked into the school to spread the School Ghost Stories so that people won't come to the school at night, and they made the janitors become possessed, in order to kick out anybody who comes to school in the middle of the night.[2]

According to Ji-hyeon and Concept, he is originally a kind man at daytime.

He carries a flashlight, a baseball bat, and a whistle, which he will blow upon spotting the player.

In the remake, he walks with a slight limp, he walks a little slower than Son Dal-su. 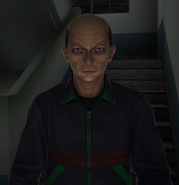 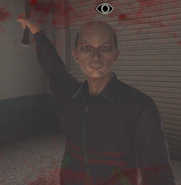 Lee Bong-gu cutscene (Remake)
Add a photo to this gallery

Retrieved from "https://whiteday.fandom.com/wiki/Lee_Bong-gu?oldid=15577"
Community content is available under CC-BY-SA unless otherwise noted.