"Huh... What? You're into So-young as well, just like all the other boys... So why did you come to school at this hour?"
— Seong-ah

Kim Seong-a (Hangul: 김성아 Also written as Kim Seong-ah in Mobile remake ver) is one of the main character of White Day: A Labyrinth Named School. She was a student in Yeondu High School and was involved in a fire accident in 1998. after the Player find the last token is it revealed she is the Master of the Labyrinth and the true main antagonist of the game.

During her high school years, she became a close friend to Han Na-yeong, whom she trusted very much and the trust was mutual between them.

Sometime in 1998, Seong-a died from an asthma attack in a school fire at the Home Economics Room, (ironically next to where you first meet her). Seong-a's death caused the insane and distraught behavior of Choi Eun-mi (Seong's mother), and the longer life span of The Master of the Labyrinth. It is unknown how and when specifically Seong-a died but it's assumed to have been from an asthma attack, whether it happened on accident location or in an intensive care unit (ICU) or while on life support remains unknown.

Na-young started feeling guilty and sad for not being able to do anything for Seong-a back then, but despite this, Seong-a's spirit held a grudge against Na-young, thinking that she intentionally left her to die.

Saddened after the loss of her daughter, Choi Eun-mi worked closely with Kim Ji-won to find a way to resurrect her daughter and bring her back to life, for that they needed a sacrifice who was "Na-young"

There are some differences between Seong-a's resurrection in the original game, as well as the remake. In the original game, the Master of the Labyrinth, trapped within the school because of the power of the five amulets, had formed a bond with Na-young to allow the Master to use her body via possession in order to feel alive. Upon trying to revive Seong-a, the Master interrupts the ritual, afraid of losing its host, which in turn causes Na-young to commit suicide, with the Master transferring over to the partially revived Seong-a, using her body for the following 3 years, presumably attending school again later as if she were very much alive.

In the remake, Seong-a and Na-young were close friends, and after her death, Seong-a blames Na-young for not meeting her outside the Home Economics room, causing Na-young to commit suicide out of spite, feeding off the negative energy of the school over several years, becoming the most powerful spirit trapped inside the school, known as the Master of the Labyrinth.

She is first seen by Hee-Min next to the Home Economics Classroom, talking to Ji-hyeon. Hee-Min's (your) sudden appearance gives her a scare, then she walks over to introduce herself.

Her suspicions of Seong-a aren't obvious at first, but as you progress you'll soon find she tends to always suspect Hui-min for everything that's gone wrong. This is primarily because he is a newcomer to Yeondu High School, it seems as though everything started falling apart when he abruptly arrived.

In the original game you first discover that she had been possessed all along, where she reveals her true identity as the Master of the Labyrinth. Seong-a is ultimately left behind at the Labyrinth after the master makes plans to possess you instead.

In the remake, Seong-a reveals that while she was alone and trapped in the school, she fed off the negative energy of the school and all who went there, stating that it gave her power and made her stronger. Her plan to dispose of Hee-Min fails as Na-young takes Seong-a with her by the ankle as the Labyrinth and its power dissolves under their feet just as the seal keeping the ghosts trapped inside the school breaks.

In Yoo Ji-min's route, Yoo Ji-min acquires a vase. Upon finding Choi Eun-mi's note, it's discovered that the vase was originally broken and repaired with the ashes of Seong-a. An asthma rescue inhaler was placed inside to "always keep her inside" the vase. 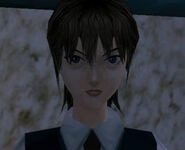 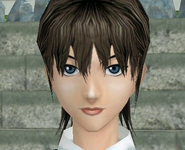 Seong-ah in the remake trailer.

Retrieved from "https://whiteday.fandom.com/wiki/Kim_Seong-a?oldid=18935"
Community content is available under CC-BY-SA unless otherwise noted.