Han So-young (Hangul: 한소영 ), also known as "Angelita", is a mysterious, yet polite girl. She has a large ponytail and 2 distinguishable long streaks of hair running from either side of her face down to her shoulders. So-young has 1 known sister, Na-yeong, who hung herself in 1998 – 3 years prior to the game.

So-young is first seen reading a book during what seems to be a school lunch or dinner break in the school gardens while Hee-min stands not far from her, planning to give her candy for White Day. Suddenly the wind blows, and a precious photo of So-young and Na-young falls at Hee-min's feet. Hee-min begins to pick up the photo but So-young snatches it off him, showing the lack of relationship they had at that point. She then walks off to accompany her friend Ji-hyeon waiting by a tree.

So-yeong tends to remain on a neutral side throughout the game, focusing more on her sister than Hui-min or escaping the school.

"You are going to help me out!"
The information in this section needs to be cleaned up, verified and moved. Please help clean it up if you are able.

So-young's Taoist beliefs developed after the death of her's older sister due to her apparent general awareness of her being trapped in the school (under the power of the amulets), and not able to correctly pass to the afterlife.

"Once, I peeped into her room and she was there... talking on her phone."
— So-yeong

The reason why So-young was at school at night was to see Na-young. Ji-hyeon claims that she comes to school at midnight often to see her.

"Table is ready! ... Sister, aren't you going to eat? ... Open the door, what are you doing in there? ... What's wrong? Why aren't you talking?"
— So-young calling Na-yeong for dinner, completely unaware that Na-young had hung herself - 1998

It is revealed later in the game that So-young was going to be used by 'The Master of The Labyrinth' as the sacrifice in part of a ritual to revive the body of Seong-ah, so the master could finally use it to escape the amulets hold on the spirits at the School. 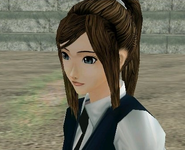 Evolution of Art & 3D Model
Add a photo to this gallery
Retrieved from "https://whiteday.fandom.com/wiki/Han_So-young?oldid=18981"
Community content is available under CC-BY-SA unless otherwise noted.