The Woman Who Hanged Herself

Han Na-young (Localized:Na-young Han) (Hangul: 한나영 ) was a former student in Yeondu High School and is So-yeong's older sister who hung herself in 1998, 3 years before the game is set.

Her death is the reason So-young became interested in Taoist and supernatural beliefs.

Na-young is So-young's older sister, So-young was born 3 years later. During high school she became close friends with Seong-ah with a level of trust so high and a strong mutual friendship between the two of them, Na-young always had Seong-ah's back and helped her whenever she needed help.[citation needed]

Sometime in 1998, a fire accident happens in Yeondu High School in the Home Economics Classroom, Seong-ah is ultimately left behind, her mother is prevented from going in and Na-young failing to save her and starts feeling guilty. Seong-ah dies from an asthma attack.[citation needed]

With the intention of escaping the five amulets power trapping the ghosts of the school, Master of the Labyrinth threatened to possess Na-young in 1997 and made her promise never to leave her. Na-young stayed possessed until early 1998 when she began to rebel against her due to the masters interfering in not allowing Na-young to be a sacrifice to resurrect Seong-ah.[citation needed]

Na-young is called in the night[citation needed] to come to the school unaware that a ritual was going to happen as Ji-won and Choi Eun-mi(Seong-ah's mother) planned to resurrect Seong-ah. Master of the Labyrinth eventually decided to force Na-young to hang herself, making it look like as if she committed suicide, while So-young knocks on her sister's room and finds out she is not there.

As a ghost, Na-young suffers the same fate as one of many ghosts trapped in the school because of the power of the amulets.

Na-young is the first ghost witnessed by Hui-min in chapter one to the left of the P.E. Storage Room, portrayed as a threat. Later she appears now and again floating about a foot above the floor and silently raising one arm to point at an important object before she quietly fades away. She was one of the only ghosts who actively helped Hui-min on his journey, majority others being threats. The possessed Seong-ah expressed fear and emotional outburst upon hearing the cries of Na-young.

"My sister has left for the afterlife..."
— So-yeong, after the Lecture Hall fire.

At the end (In the good ending; depending on which ending you get) So-young says that her sister had passed onto the afterlife, indicating that the power of the amulets had finally been broken; all the ghosts had been set free in the school. This explains the appearance of the many flying ghosts in the Lecture Hall, just before Chapter 5.

The first meeting with the ghost (cutscene, original game) 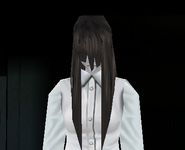 So-yeong with her hair down (like Na-yeong, her sister) as she appears in the locket item (Gifted to her by her sister, Na-yeong), Initially this was thought to be Na-young.

The first meeting with the ghost (cutscene, remake)

Han Na-young in the cutscene with So-young (bug, PC remake)

Han Na-young in the game (bug, PC remake)
Add a photo to this gallery

Retrieved from "https://whiteday.fandom.com/wiki/Han_Na-young?oldid=18618"
Community content is available under CC-BY-SA unless otherwise noted.