The Grandfather Ghost is a deleted ghost from White Day: A Labyrinth Named School. It was eventually removed for unknown reasons and it's textures were leftover in the data files.

Although the ghost was not shown in the game, he can be seen in one of games artbox present in the first main building, it's speculated that he would appear all of the building, outside of the school stalking you and staring at you from the window.

He was eventually removed for presumably being 'too disturbing' however he is still present in the .nop files of the final original game.

Some people had estimated the ghost is 'The Housemistress Spirit'. But this fact was not definitely known. 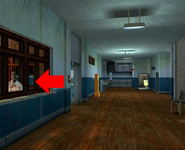 Original file in the data files.
The person in the image is wearing a hanbok (Korean traditional clothes) for women.
Add a photo to this gallery

Retrieved from "https://whiteday.fandom.com/wiki/Grandfather_Ghost?oldid=13116"
Community content is available under CC-BY-SA unless otherwise noted.