Choi Eun-mi (Hangul: 최은미 ) is an unidentified deranged woman that roamed around Yeondu High School from 1998 to 2001.

"You are going to help me out!"
This section requires expansion. You can help The School: White Day Wiki by expanding it.

She is the mother of Seong-ah. After her daughter's death,[1] Eun-mi attempted to get the help of Ji-won in order to channel the power of Qi and perform a ritual to resurrect her using three people, a person who calls the dead (Choi Eun-mi), a person who can break the seals using the amulets (one who sees ghosts - the music teacher, Ji-won) and a sacrifice (Na-yeong), but due to the master of the labyrinth possessing Na-yeong, it disallowed itself to lose its host, interfering in the ritual.

This resulted in Eun-mi going mad (as was warned could happen when you try to revive the dead), while the music teacher killed himself over grief in 2000. Eun-mi in her mad-state, despises the sound of alarms and sirens as well as the whistles of the Janitors that patrol the school as they were the last thing she heard and saw while being held back, unable to try and rescue her daughter. During that period in 1998, to begin with, she used to hang around in the school after what happened and there were lots of rumours about her, such as being the lover of the principal, old teacher, a dead student's mother. But as time went by, they found she wasn't anyone special. Rumours gradually disappeared. She's become a feature to the school, she would come at the school watching the traffic and students as they pass and even warning them about any fires, due to the trauma she endured.

When Lee Hui-min encounters her in 2001, she stops him from leaving the New Building. Eun-mi will do anything for the sake of her own daughter, killing or knocking off the Janitors completely in the process and chasing Hui-min.

During the game Eun-mi will stop at nothing to perform the ritual for her daughter again, trying everything to prevent Hui-min from releasing all the amulets and freeing the spirits. Due to her overwhelming emotions and the negative energy surrounding the School, Eun-mi has the power to disrupt the area around her. 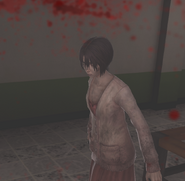 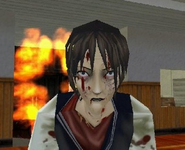 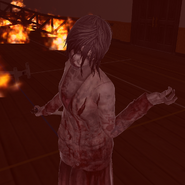 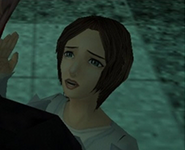 Eun-mi in flashback: Eun-mi outside, during her daughter's death in the Home Economics Room. One of the janitors had prevented her from entering (original game)

At the last stage of Yoo Ji-min route, Eun-mi became a giant and to find Ji-min.
Add a photo to this gallery

Retrieved from "https://whiteday.fandom.com/wiki/Choi_Eun-mi?oldid=17189"
Community content is available under CC-BY-SA unless otherwise noted.